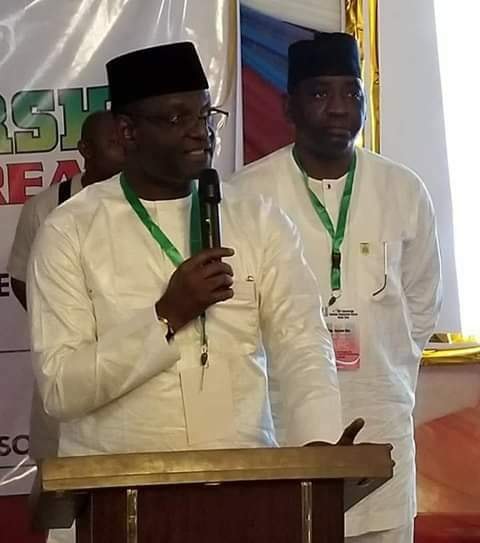 The gubernatorial candidate of the APC, Benue State, Rt Hon Emmanuel Jime, was at the Wadata Market today, the scene of which lasted for several hours destroying goods and the market infrastructure.

Mr Jime had gone as far as Yelwata on his way to Abuja when he was alerted of the fire prompting him to turn his convoy around. He was greeted by a large crowd who were complaining at once at what could have been done better by the proprietors of the market to stem what they say is an avoidable fire. He was not able to cut through the din to address them properly.

However, in a statement released to IPN Mr Jime said as follows:

“Today, I learnt of the unfortunate loss of goods and market infrastructure at the Wadata Market following a fire incident that lasted for hours.

I was on my way to Abuja, as far as Yelwata when I heard of the development and had to return to see the traders. However, the mammoth crowd that heralded our visit, made it difficult to address them properly.

I wish to use this medium to commiserate with traders and business owners at Wadata Market over the regrettable inferno that has led to the destruction of their goods, stalls, and more painfully, people’s sources of income.

As painful as these losses are, I implore everyone affected by the inferno to take solace in the fact that no lives were lost. As the saying goes, “where there’s life, there’s hope”.

We will recall that three months ago, there was a similar fire incident at the Gboko central market, which like this one could have been successfully contained if emergency response processes were in place. I am using this opportunity to call on the government to be proactive and institute measures that will forestall the occurrence of such incidents at our markets.

Beyond making monetary donations, it will be important to set up functional fire service posts at our markets as a short-term measure while issues of market site development, planning and insurance should be explored to, not just prevent fire outbreaks, but improve the general service conditions of our markets in the long run.

Once again, my heart goes out those affected by the Wadata market fire. Accept my deepest sympathy at this trying moment.