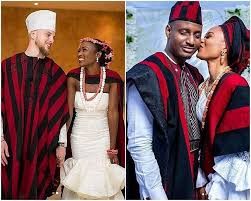 The research is based on the observation and participation in the marriage rites of the Idoma people of Nigeria by the researcher between years 1995 – 2020.

The Idoma tribe is the second largest ethnic group in Benue State of Nigeria with a population of about eight million people. Marriage in Idoma land is highly revered as a sacred union and transition to parenthood. In the Idoma traditional societies, marriage is considered ‘glorious’ when it is contracted between the age of 18-28 for women and 25-38 for men. Several traditional societies in the Idoma nation have the notion of marriage as a characteristic quality of a responsible member of the society. Polygamy is the prominent form of marriage in the Idoma nation, with attendant traditions, including ‘confession.’ However, the advent of Christianity and western education give room for nuclear marriage and celibacy for religious purposes.

Oji was instituted by ascendants of the Idoma nation to preserve the chastity and sanctity of marriage. Chastity and virginity is reputed as precious gifts of a woman to her new husband in the Idoma nation. Prior to formal marriage proposal to any young lady, the potential groom’s family will do a thorough investigation of the characteristic tendencies common to women in the prospective bride’s family. Some of the traits commonly investigated are whether they bride’s family members die at childbirth, give birth to stillborn, respect husband and in-laws, give birth to male children, adulterous, or practice witchcraft. The most significant probing is whether the potential bride is a virgin and has not been defy by a man. A young lady having a boyfriend or dress in a sexually induced manner is assumed to be lecherous and portend a disaster in a man’s life. Such ladies are not considered for marriage, especially among the members of her community.

Where a potential bride’s sexual reputation cannot be ascertained, the prospective groom’s family relies on ‘confession’ tradition to know the sexual state of the bride-to-be. This tradition is a ‘double-edged sword’ capable of consolidating the love between soon-to-be-married spouse or terminating the entire marriage process and rites.

From the 19th century to the middle of 20th century Idoma society, a non-virgin bride is regarded as a disgrace to her family and has little or no reverence before the members of her community and that of her husband. Her pre-marital sexual affairs will be a ‘public knowledge’ in her community and its environs. How did the community become aware of her sexual escapades? What is the prospective groom’s reaction to such knowledge? This is the emerging juncture that informs the birth of this research.

Growing up into adolescent in my community in Idoma land, the most inquisitive moment in marriage rites is “confession hour.” Both young and old look forward to the time when the bride-to-be will confess her improprieties, especially immoral affairs at the foot of a shrine, a microcosm of Alekwu; the traditional god of the Idoma nation.

Articles needed in preparing the god (Alekwu) to ‘listen’ to the confession of the colleen in the presence of the members of the community are: a hen, kola nuts, water, palm oil, wine and incantations. The prospective bride will be on her knees, carrying the hen and kola nuts inside water in her hands and confess any kind of sexually-related relationships she had with the opposite sex.

In one of the confessions I witnessed, the bride-to-be said her secondary school classmate mistakenly had contact with her breasts when she was fighting him for tearing her notebook. Another prospective bride confessed of a man who approached her for sexual relationship but she turned him down. These kinds of ‘sexual misbehavior’ are immediately forgiven and discarded by elders. The prospective groom’s family will then proceed to payment of the bride price.

There was one prospective bride who confessed of having sexual affair with a man twice. The negative reactions of the groom’s family were unimaginable. The most nervous part of the confession tradition is that the lady must mention the name of any man who had sexual contact with her; however, there is no any stipulated punishment for that man according to traditions and customs. Rather, it is a pride for the man for “going through” a virgin and leaving the “dross” for an uniformed or weak man to pay pride price for. In some instances, the lady may not be able to marry a single man, only married men will ask for her hands in marriage, no matter how young she may be and her family will hurriedly give her out as second or third wife to avert more ‘ridicule and shame.’

How can the people ascertain the verity of the prospective bride’s confession? Every confession is subject to verification through spiritual medium. The hen will be covered in a locally made basket at the foot of the shrine overnight. Note that confession is usually carried out at dusk. At dawn, the selected elders will storm the foot of the shrine to uncover the hen. If the hen dies, it is believed that the bride-to-be lied or refused to confess some of her sexual escapades with the opposite sex. The groom’s family will be informed and the marriage ceremony that is to hold at noon of that day will be suspended. The prospective bride will be compelled to make another confession.

In several cases that the hen died, the groom’s family discontinued the marriage process and rites, alleging that the bride-to-be cannot be trusted. In such instances, the engagement price (the real bride price is not paid until after confession verification) is refunded to the groom’s family. The young woman will be subjected to stigmatization, mockery, ex-communication, desertion and isolation by her family and the community for bringing her family’s integrity to disrepute.

Most of the ladies who had these experiences usually travel out of their communities to cities or another states and get married to men from other tribes or to Idoma men living far away from their communities.

The Protests Against Confession Tradition

In the late twentieth (20th) century Idoma society, there was massive protests against ‘confession tradition’ by the emerging pro-feminist individuals, Christianity and ‘civilization’ advocates. Let’s look at points of protests from these three categories of people.

These groups of people have aversive posture toward the confession tradition because “it is patriarchal and partial.” They accused the Idoma traditional god (Alekwu) of institutionalizing customs and traditions aimed at protecting and promoting male chauvinism and feminine subjugation. They interrogate the custodians of the customs of why it is prescribed and mandatory for the female gender to confess every pre-marital sexual affairs while the male gender who lured them into such affairs are protected by tradition and no punishment of any kind is enshrined in the custom to checkmate the Casanova and gigolo lifestyle of the male gender. The usual hackneyed answer to this query is that the traditional god (alekwu) permit polygamy but forbid polyandry, therefore men are allowed to have sexual affairs with different women even before marriage, provided his sex partners are not other men’s wives.

The pro-feminist individuals agitated for egalitarian Idoma traditional societies with customs and traditions that promote gender equality and fairness. This is one of the strokes that made the confession tradition moribund.

Doctrinal ideologies and notions of the Idoma people of Christian faith vehemently go against pagan-related traditions, especially marriage-related confession of ‘sins’ to pagan god to the entertainment of members of the public. Most Christian leaders argued that ‘confession’ tradition is not an Idoma culture, rather, it is an idol practice that only the adherents of idols can be obliged to do.

They opined that a Christian who committed sexual sin and has been forgiven by God has no justification for confessing such sin to an idol that has no power to forgive. The Christians usually quote several Bible verses to corroborate their submissions. When I was in junior secondary, class three (JSS 3) in my Idoma community, a Christian leader banned all the members of his denomination from attending marriage ceremonies and burial interments of non-Christians as he claimed that attending such events amount to “glorification of evil practices.”

The mass conversion of the Idoma people in traditional communities in the early 21st century from paganism to Christianity propels the confession tradition into oblivion in most villages. Even in the villages populated by pagans, most of parents do not want to subject their daughters to traditions that may earn their families disrepute.

Several idoma ladies and young women, including non-Christians now make it a condition for accepting marriage proposals; that there will be no any form of confession, neither to shrine nor the people. Several ladies whose parents are pagans convert to Christianity to ‘escape’ a tradition that will expose their secret sexual relationships with the opposite sex to the public.

In several communities in Idoma nation as at year 2020, most ladies and their parents profess Christian faith and vehemently oppose every vestiges of pagan tradition. However, a considerable number of them clandestinely visit pagan traditional diviners, native doctors and magicians to seek for all kinds of ‘helps’, including ‘helps’ to harm others.

Civilization comes with its own modern and popular culture. The traditional values and qualities are being eroded and replaced with modern culture. Virginity is a treasured value in the Idoma tradition of 18th to 20th century. The 21st century ushered in a modern culture in which virgins are being ridiculed and taunted for promoting abstinence and chastity, especially among the youths.

A female adolescent who do not have a ‘boyfriend’ (sex mate) is regarded among her peers as “local” and “uncivilized.” Pre-marital sex is now a norm; therefore, there is no room for confession (Oji) of an ‘acceptable’ lifestyle as an ‘immoral affair’ in the society where it is accepted. This was the burial of confession trepidation (Oji). However, the progenitors of the Idoma nation instituted Oji to preserve marriage sanctity and not intended to witch-hunt or oppress the feminine gender.

Some of the male advocates of “civilization” are adverse to abstinence and chastity. They argued publicly that they cannot marry a lady who abstained from pre-marital sex, they want a lass with “experience” and that can “perform well” in romantic romp. Keeping yourself chaste is now an obsolete tradition that the 21st generation of Idoma youths has no interest in. Therefore; confession tradition is now a thing of the past.

The confession tradition commonly refers to as oji in Idoma language was instituted by ascendants of the Idoma nation to preserve the chastity and sanctity of marriage. Despite the death of confession tradition, marriage is regarded as a sacred union among the Idoma people. Post marital sexual affair with another man (adultery) is highly prohibited. The new age tradition that heralds the moribund state of oji in Idoma land is responsible for the death of similar traditions in most African nations.

Ugwu Lawrence Enenche is a prolific writer and reputable researcher on African literature and folklore. His poems, articles, research works, short stories and novels have won several awards. His recent novels are Just After Dawn, A Talking Dream, Gone With Love and Concrete Shadows. He is from Ogbadibo local council area of Benue State, Nigeria. Contact: ennywall1234@gmail.com