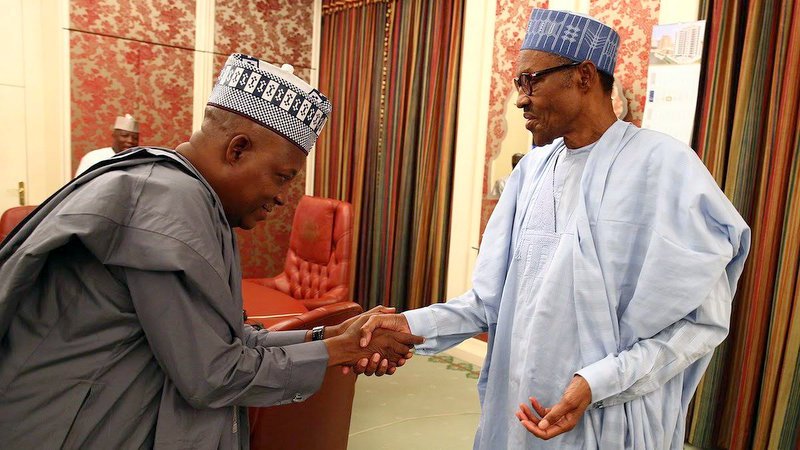 Kashim Shettima, governor of Borno state, broke down in tears before President Muhammadu Buhari over the setbacks being recorded in the Boko Haram war in his state.

This happened in Abuja on Monday, as the governor met the president at the Council Chambers of the Presidential Villa, in the company of the country’s key defence officers.

Shettima, who led leaders of the state to Buhari to seek an audience with the president, said in his introductory remarks that they expected Buhari’s coming as commander in chief to end the onslaught of the terrorists.

“Between 2013 and 2014, we witnessed the most daring and most viscious evil of the Boko Haram, losing 20 Local Government Areas,” Shettima said.

“However, we rushed here because of the recent upsurge in the activities of the demented monster called Boko Haram especially in northern Borno senatorial district. We are here because since 2015, Mr. President, you were able to restore our hope.

“Sir, you have demonstrated empathy for Borno and the overriding commitment to ending the Boko Haram. This is why we rushed here on witnessing some setback.

“We are here because we thought that Allah will use you to fully reclaim Borno traditional glory of being the home of peace. We are here as a people who worked, prayed and waited for your Presidency in the firm belief that with you as the Commander In Chief, Boko Haram will become history in Borno.”

Shettima told the President that the leaders came to present a set of observations and specific requests from an extraordinary security meeting held a week ago in Borno State, which will require urgent presidential intervention.

Shettima amidst tears over the current setback in the fight against insurgency, told Buhari that the leaders have not lost hope in his ability to win the war and restore peace to the state.

He said the people have not lost all hope in the president’s ability to put an end to the insurgency in the northeast.

“Mr. President, we have not, and Insha Allah, we will not lose hope in you because we have witnessed and survived worse moments before you came. We do not feel hopeless. Our hopes are very much alive and they are very high.

“We came with some observation and 10 requests for urgent presidential intervention. These observations and requests are products of discussion in the aftermath of our extra-ordinary security meeting held one week ago.

“We didn’t rush to come after the meeting. We felt the need to travel to northern Borno, interact with displaced persons and the military so as to strengthen public confidence.

“I will seek the understanding of the journalists by not making public any of our observation and 10 requests. They are matters of security which we hope to discuss with Mr. President in a close door.”

His unexpected outburst promptly led to members of the press being excused from the meeting.